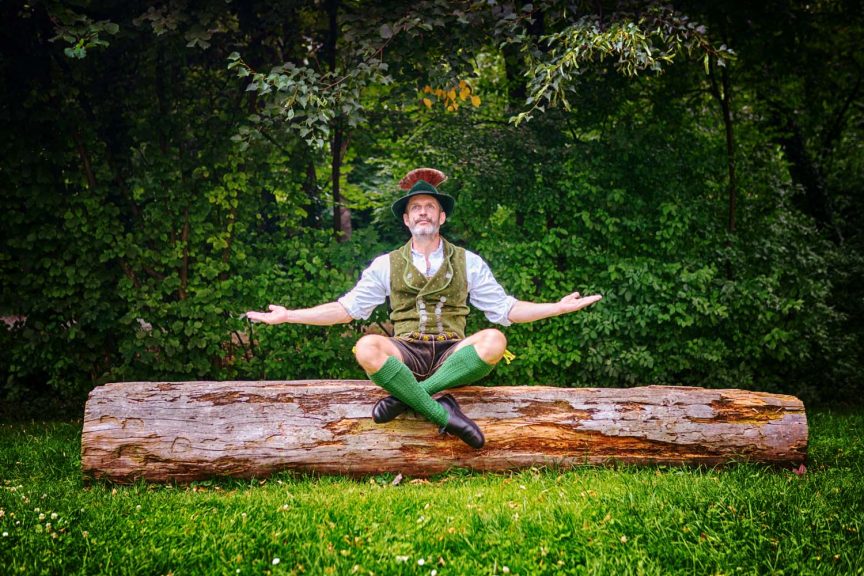 Whether it’s early fall or fully into October, there’s one fun-filled festival that springs up all over the world that combines laughter, singing and drinking together maybe better than any other celebration known: Oktoberfest.

(this claim is completely disputable of course, as the Irish and Brazilians may attest!)

In this article we are going to cover:

What’s really going to surprise you is that the Lederhosen original design didn’t actually original in Germany, but in France!  More on that below.

To answer the main question of this article before trailing off into a tangent on the history of Oktoberfest and a bit more info on the Dirndl, lets talk about:

Why do they wear Lederhosen? 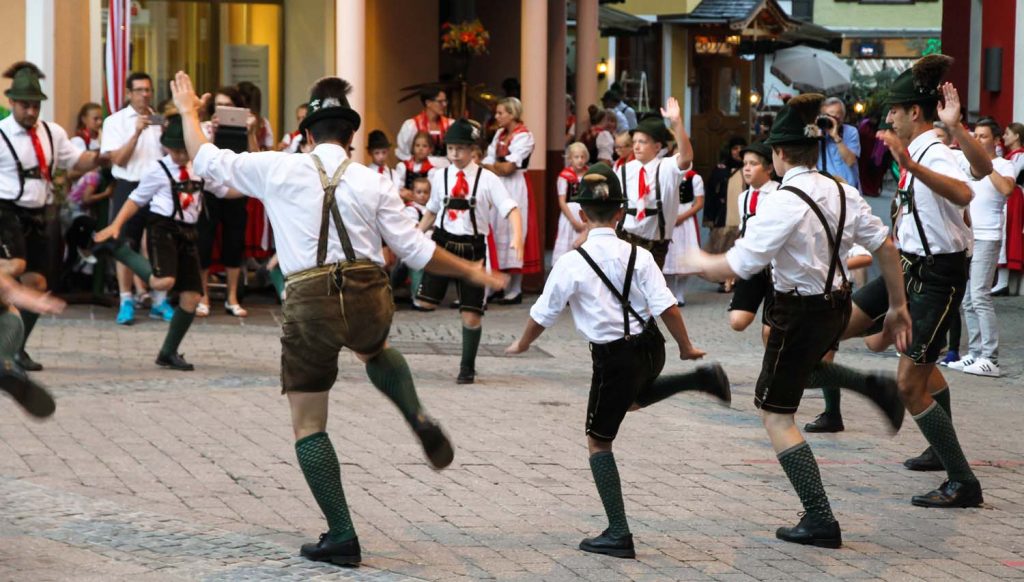 At first it was peasants who lived in the mountains and countryside of Bavaria that wore the Lederhosen.  The simplicity of the outfit allowed them to be easily made and made that process easily repeatable so it was shared and transferred from family to family.

Let’s talk about what the Lederhosen is.  The word literally means “leather breeches”.  They are basically short or knee-length breeches made out of leather and today worn as a traditional garment.  The Lederhosen most of us know are actually a shorter version of a couple other variants.  There are two longer versions generally called Bundhosen or Kniebundhosen.

If you think about most fashion trends today they appear to come from places like Paris or New York, but even those stem from designs that spring up out of functional need or urban expression.  The Lederhosen was no different!  Even though the Lederhosen began in the mountains and countryside it soon spread into the townships and into the more noble class of old Bavaria.

So why did the Bavarian mountain and country peasants create the Lederhosen?  Function.  For the Bavarians, it was all about outdoor activities, both recreational and as a way of life.  The Lederhosen (again, what we deem more to be an excellent Oktoberfest Costume today) served the needs of Bavarians by being a strong and durable material, especially for horseback riding and hunting.

After proving it’s function, as mentioned above, the Lederhosen became adopted by the noble class and had soon spread as the primary attire for men in and around Bavaria.  We mentioned above however that the Lederhosen didn’t actually originate in Germany, which is true.  The French were the original designers (there’s Paris again!) of what became the Lederhosen.

The French wore which was known as a Culottes or a “knee breach” and it was an article worn both by the aristocratic and non-aristocratic as leisurely apparel.  Through the French Alps and into Germany the mountain dwelling Bavarians shared their culture and foods.  It was the German Bavarians however who turned from a cloth type of Culotte to a Leather one!

The leather Culotte was much more durable and met the needs of the German workers, thusborn: the Lederhosen.

Lederhosen was the main style of wear for years for German men.  It wasn’t until the invention of none other than Denim that the Lederhosen began to fade.  Once jeans were introduced, like many other traditional garments and cultural wear began to disappear.

With so many Oktoberfest celebrations now adopted and practiced around the world the Lederhosen has become perhaps the most recognizable cultural costume in the world!  Similarly, the Dirndl has experienced the same notoriety and remains and likely will remain the Oktoberfest costume of choice for women for centuries to come!

Where can I find a cheap Oktoberfest costume?

The best place is online.  There are many costume stores online and likely in your local community but you’ll get a much wider variety of choices if you search online.  On Amazon there is a huge selection of Oktoberfest Costumes, both lederhosen and dirndl, which are without dispute the quintessential costumes of Oktoberfest.

In fact, these costumes may be the most recognizable outfit around the world, immediately telling a passerby there’s a German festival abound!

You can also check out other costumes sites in order to order your Lederhosen online.  We recommend going with HalloweenCostumes.com as they also have a large assortment available. 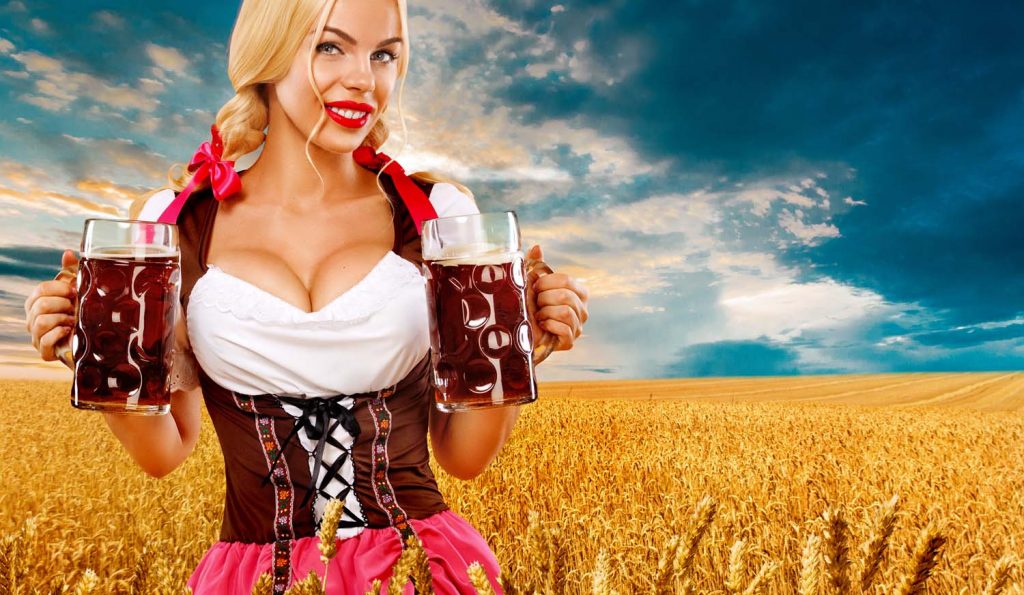 What is a Dirndl Costume?

At the same time as the lederhosen was gaining popularity in German Bavaria so to the Dirndl was growing a favorite for women.  Initially, the Dirndl was made of simple and affordable materials such as wools but eventually they started to be made of silks and other expensive fabrics the noble women preferred.

When was the Dirndl Invented?

The Dirndl initially started as a very simple type of feminine dress worn in Austria.  When we say “Austria” we really mean the Alps.  The dirndl was simple and plain and was originally worn simply by peasants living in the Alps.

Like the Lederhosen, when the more wealthy began to adopt the style and mix more expensive fabrics with styles that were becoming more popular across Europe, like the bodice.  Eventually the Dirndl evolved to something similar to a regular dress that also included the bodice and a blouse but kept the simplicity of the skirt and apron.

Eventually, like the Lederhosen as well the more modern styles of Europe began to weave themselves into Germany and the traditional Dirndl slowly faded out of the mainstream apparel markets and even further into the closets of older generations.  With this change came the move to making the Dirndl more of a representative costume along with the Lederhosen.

It was also the same declaration in 1887 for Oktoberfest that saved the soon to be relic of a Bavarian dress and the Dirndl, like the Lederhosen is one of the most recognizable costumes attributed to an old culture and way of life as any.

Where can I buy a Dirndl?

Like the Lederhosen, Dirndls can be found in costume shops within cities and many (costumes) are still held within families and past down to future generations.  The easiest place to buy a Dirndl however is online and we recommend either Amazon or HalloweenCostumes.com.

Amazon has a variety of Dirndl Costumes to choose from and you’ll find simple to elaborate Dirndl costumes on HalloweenCostumes.com as well.

We hope you found this information helpful and enjoy your Oktoberfest celebration!!