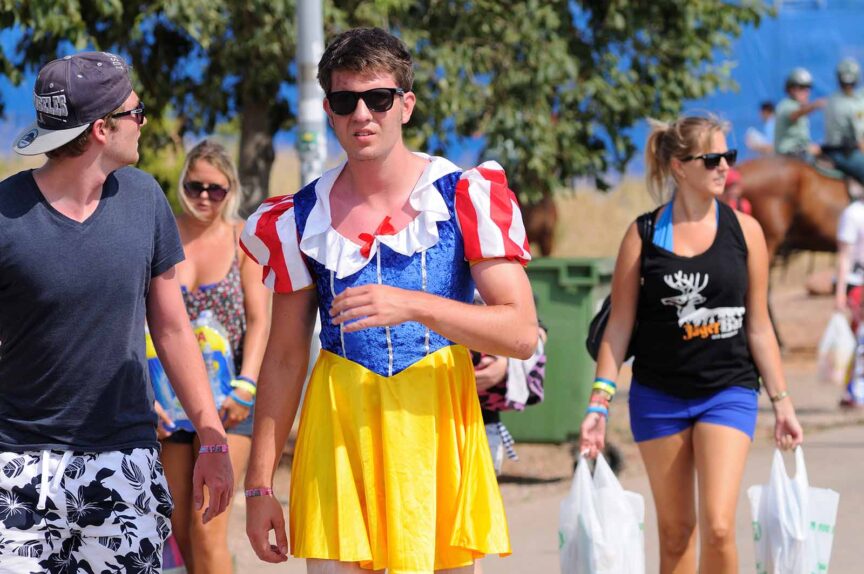 Luckily, there are plenty of lesser-known and unique Disney characters to base your costume off of, including Anastasia, Jane Porter, Kronk, Darla, and more!

Some unique costumes are from movies you know and other unique costumes might be of a slightly deeper cut than the average Disney fan. For now, though, here are 10 of the most unique Disney costumes that are guaranteed to not be seen anywhere else:

10 of the Most Unique Disney Costumes

Many girls and women go as Cinderella to Halloween or costume parties, but almost no one goes as her evil stepsisters, even when anyone would recognize them as Disney characters!

Anastasia and Drizella are also super easy costumes to put together. All you need for them are:

If you have a friend and want to do matching costumes, you two can pick to be one or the other! You can even have a third friend be Cinderella or the evil stepmother!

Jane Porter is one of the most underrated love interests in Disney films. She’s smart, capable, a talented artist, and only gradually fell in love with the titular protagonist! This is another easy costume to pull off, only requiring:

If you don’t want to feel too hot or stuffy at a costume party, you don’t have to look for a dress with a petticoat or frills! A simple yellow dress will do in that case.

He may be getting a bit more noticeable as of late, but the ditzy, but lovable Kronk from The Emperor’s New Groove is still a unique Disney costume for anybody to try!

All you need is:

Kronk is also a good option for matching costumes, as your date or friend can go to a costume party with you as Yzma, or even Kuzco!

Everyone talks about how Edna Mode was the breakout character from this 2004 Disney and Pixar classic, but almost no one talks about Mirage. She may have been a femme fatale and the secondary antagonist, but she had a sense of ambition and morality! It’s a shame that her fate was left unknown.

And her costume is super easy, only requiring:

There are other variations to the Mirage costume, such as wearing a gray pantsuit, but her black dress is arguably her most iconic outfit.

Aurora and Maleficent are among the most ubiquitous characters in the Disney animated canon.  But, the fairies that raised Sleeping Beauty themselves are almost never portrayed in costume, even though they’re also recognizable and appear in tons of Disney media!

To achieve this costume, you will need:

This is another good option for matching costumes, as you and two of your friends can go as all three of the fairies if you so choose! If you’re extra daring, maybe get a fourth friend to play Briar Rose.

Meet the Robinsons may not be the most beloved or well known Disney film, but the Bowler Hat Guy is considered to be one of the most underrated villains in Disney. He is arrogant, demeaning, and immature, and a costume of him is super easy to achieve.

All you will need is:

Enchanted was a humorous and charming subversion of Disney’s fairytale tropes, and who doesn’t like laughing at themselves every once in a while? Giselle is the standout character of this cult classic, but she never gets any love in costumes, even though she has many outfits to choose from!

To start off this costume, all you need is a waist-length red wig, but you have plenty of options for a dress, including:

Of course, the white ball gown is the most well known of Giselle’s costumes in the movie, but there are plenty of options for those who can’t afford or don’t want to wear such a heavy dress.

Based on the novel of the same name, Bedknobs and Broomsticks stars the breakout character Miss Eglantine Price, a witch in training who is forced to take care of orphan children during World War 2.

And because it’s a 40s style costume, Miss Price is easy to pull off! All you need is:

If you really want to sell the witch part of the character, bring a broomstick with you to seal the deal! Perhaps have a bedknob with you too in case you fear people won’t understand the costume.

Not everyone may remember this mid 70s cult classic, but those who grew up on Escape to Witch Mountain will definitely appreciate a costume dedicated to its sibling protagonists!

To achieve this look, you need:

This is another good idea for matching costumes for both friends and couples.

Though she doesn’t appear for most of the movie, Darla made her mark in the world by being the girl every fish would fear, and the fact that there are few costumes dedicated to her is borderline criminal.

Here’s what you need for a Darla look:

If you are comfortable carrying something fragile around, fill a plastic bag with water and put a toy fish in it. That’ll complete the look for sure!

What Makes These Disney Costumes so Unique Compared to Others?

There are various reasons why these Disney costumes are so unique compared to others. Some, like the evil stepsisters and Mirage, are simply secondary, albeit underrated, characters from well established Disney franchises. Others, like Miss Eglantine Price and the Malone siblings, are from underrated Disney movies that are considered cult classics today.

Even though some of these characters are more recognizable than others, most people tend to stick to princesses and superheroes, so there won’t likely be anyone else dressed up as, say, Jane Porter from Tarzan.

Which Unique Disney Costume is Least Likely to Be Seen at the Same Party?

The less likely you want a unique Disney costume to be seen at the same party, the more you’ll have to dig for less well-known characters. Everybody wants to be Cinderella, but no one wants to be Miss Eglantine Price.

However, that brings up another problem: How does one make sure people know who you are? You don’t want to be the second or third Ariel people see at a party, but you want people to recognize your character!

To balance these conflicting problems out, try and go as a minor character in an already established Disney franchise or the main character in a lesser-known one. Whether you go as the Bowler Hat Guy or Milo Thatch or even Chicken Little, you’ll be sure to get recognized and be the only person in said costume at whatever event you are going to!

And there you have it! 10 of the most unique Disney costumes that are guaranteed to not be done by anyone else, regardless of which party you are going to.

Just remember that the best compliment to a costume, regardless of who you are going as, is that you are comfortable with what you’re wearing and that you feel confident in yourself. Do you have a favorite unique disney costume you’ve worn? Share it in the comments below!