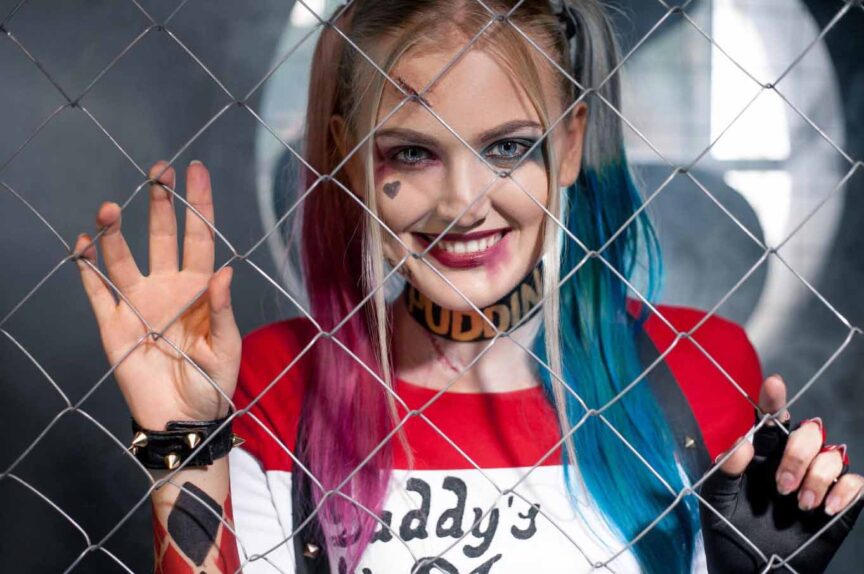 Who has the body of a supermodel, the mouth of a construction worker, and the hairstyle of a schoolgirl? That would be Harley Quinn, the fictional pigtailed supervillain who stole the hearts of DC Comic fans and cosplayers everywhere in her live-action 2016 debut in “Suicide Squad.” She’s tough-talking, sexy as hell, and we think she’s a shoo-in for Cosplaymate of the next decade!

If you’re a full-on cosplaygirl, chances are you’ve got an inner Harley Quinn that’s just dying to be let out!  And, in this article, we’re going to help you do it.  We’ll start by answering all your questions about Harley’s wardrobe, and then we’ll give you some Harley Quinn Costume ideas that you can steal for the next convention!

First, we’ll cover the basics around Harley Quinn followed by some hot button issues. Then we’ll get into some of the craziest, sexiest Harley Quinn cosplay costumes out there!

Now without further ado, let’s keep calm and get our pigtails on.

What does Harley Quinn wear?

No more Mrs. Joker here! No longer is Harley the wearer of the iconic skintight harlequin outfit designed by Paul Tim! (so 1992).

The new Harley Quinn comes out to cosplay in glittering booty shorts, stilettos, ripped up baseball shirts, corsets, bras, and, of course, the signature “Property of the Joker” bomber jacket.

Hey, she’s a sexy girl,  and if she wants to wear nonexistent shorts, more power to her! (source).

How many outfits does Harley Quinn have?

That’s akin to asking how many clothes Barbie has. Remember, Harley Quinn is first and foremost a comic book character, so she’s not too worried about costume changes.  But, if we had to get technical, there are 4 outfits that really stand out.

Those are the main outfits! (source).  Remember, she’s the Joker’s lady and this guys is way more badass then Kanye. Let’s just say if she were real, we figure she’d give the Kardashians a run for the money!

If there’s one thing we can say about Harley Quinn’s costumes, they’re getting crazier, smaller, sexier, skimpier and more scandalous with every Harley reincarnation! In fact, Harley Quinn costumes are some of the Hottest Women’s Cosplay Costumes on Amazon! Mirror, mirror on the wall, which is the craziest and sexiest of them all? Here are a few Harley Quinn costume ideas that will melt your face off!

This sexy and comfortable costume by Charades is 100% polyester and even has the text printed on the back of the jacket “Property of joker!”  The full costume includes the shirt, jacket, shorts and belt.  It’s HOT as an officially licensed Suicide Squad product.  Just remember to pick up the accessories separately.

These hot pants will make an excellent, if very small, base! Made of polyester and spandex, and officially DC licensed, these glittery booty-out shorts are one hundred percent Harley, even if they do cover a mere two percent of your entire body! Add baseball shirt, bat holster, etc, and give Harley some cheek! Check here for price on Amazon!

Is it us, or is this costume especially smokin’? This Arkham City era Harley costume is Harley on her very naughtiest behavior! In hot pink and black, this costume comes complete with a cropped bustier, low rise pants, long fingerless gloves, an eye mask, and a choker! Check here for the price on Amazon!

Maybe not the sexiest or craziest, but hands down, the cutest, this PG-rated Harley Quinn costume is our top choice for the little supervillains! With signature Suicide Squad Harley Quinn shorts (athletic style), a Daddy’s Little Monster tee, and the much-coveted, “Property of the Joker bomber, this costume screams to be seen. Check here for the price on Amazon!

What color is Harley Quinn's hair?

We bet your dye (ing) to find out! Suicide Squad-era Harley sports blonde hair with pink dip dye on the right ponytail and blue dip dye on the left ponytail. Older incarnations of Harley feature the supervillain with a half red, half black do. (source) For a tutorial on how to dye your hair like  Harley Quinn’s, check out the  YouTube video here.

Is Harley Quinn a Superhero?

Technically, the answer is no. Harley Quinn can’t be classified as a superhero because she is not inherently good. She would be better described as an anti-heroine or supervillain – in more colloquial terms, a badass!

That’s our little puddin’! She may be rough, but we love her. We hope you’ve enjoyed our little journey into the world of Harley Quinn! And, if you’re looking for more costume ideas, you’ll find tons of them at Cosplay Costumes !  Until next time, remember: sometimes the only way to stay sane is to go a little crazy!