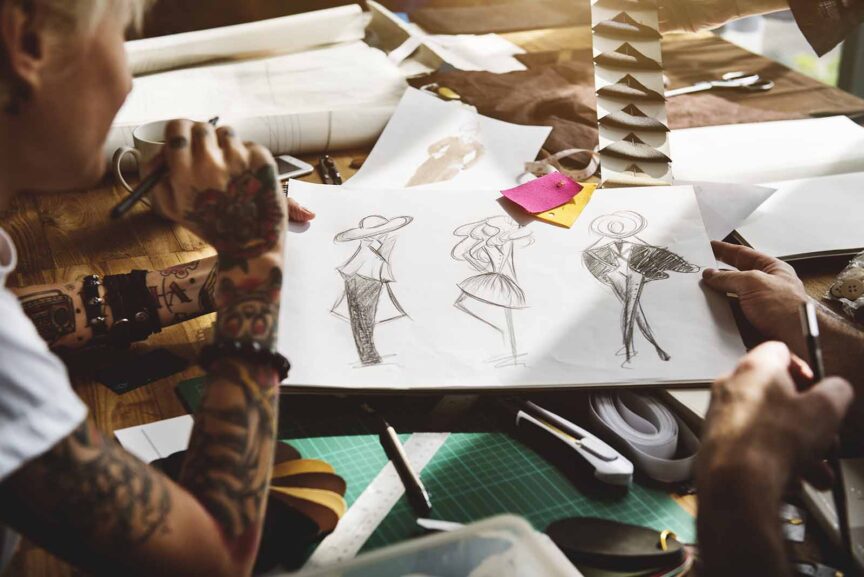 You have probably looked at the costumes in a movie or on Broadway and wondered how they ended up looking so magical and fitting for the time or situation. You may even wonder how you can learn to design costumes like that.  The magic you experienced did not happen on its own. It was made possible by the costume designers that pulled all the looks together.

There are no set courses or degrees that need to be obtained to learn the art of costume design; however, it is a path that is often followed by those involved with fashion design.  Costume design is used throughout the arts, so a knowledge of the specific area would be helpful.

In this article, you will find out how you can learn costume design. You will also be introduced to a famous costume designer that used deception to make her mark in the industry and learn where you can work as a costume designer.

How Do I Learn Costume Design?

There is a costume design process and one of the best things you can have in the costume design industry is experience . But it is important to remember that experience will not always give you a paycheck.  You may have to begin by volunteering your time to a theater company to see how costume designing works. Once you have learned the basics, you can begin to hone and refine your skills.

Check out the best online costume design courses in that article!

How Much Money do Costume Designers Make?

Most people consider how much money they will make at a job because they accept the position.  Remember, costume designers can make or break a show based on their creativity and ability to represent the characters with their attire

Like any profession, there are certain levels you must progress through.  With each level of progression, the amount of money you are paid increases.  Costume designers begin at the lowest level and work their way up to a higher pay level:

When looking at those numbers, you can tell that costume designing is not an extremely lucrative career. However, it is a career that takes great passion and enjoyment on the part of the designer. While those numbers vary in range, it is also important to know there are outliers on both the high and low ends of the spectrum.

How Much do Hollywood Costume Designers Make?

Often, you think of Hollywood, and you think of money and superstars.  While this may be true for Hollywood, it is not necessarily true of costume designers in Hollywood. Sure, the venue is different, and you are likely styling famous people and shows, but that does not mean your pay increases exponentially.

If you want to become a movie costume designer the most important thing to remember when beginning the profession of costume design is that the journey to success is often wrought with disappointment and a tremendous amount of hard work.  If you have heard the term starving artist, you may connect to those feelings in the beginning because your paycheck will likely be minimal.

Who Is a Famous Costume Designer?

Edith Head spent her entire career working between Paramount and Universal Studios.  Many costume designers looked up to Head because of her ability to create costumes for all roles.  She was able to create sensible costumes as well as extremely elaborate costumes. Because of her work at both Paramount and Universal, she was nominated for over 30 Academy Awards  (Source: Britannica).

Who Did Edith Head Design For?

Head was able to design costumes for many notable individuals. Grace Kelly, Audrey Hepburn, Ginger Rogers, Cary Grant, and Ingrid Bergman are among some of the more famous screen stars that she worked with.  Her costume design influenced the way the public viewed the stars. (Source: The Cut)

Edith Head was a unique designer because she was one of the first female head designers to work for a major motion picture studio.  She was instantly a hit because of her forward-thinking with designs, but she was not always a designer.

Head’s career began as a teacher; however, life circumstances that required a higher salary forced her to explore the world of costume design.  To get her first job as a designer, she shared designs created by other people and claimed them as her own.  Eventually, she fessed up to using other people’s work, but this was after she was already well on her way to costume design stardom. (Source: Biography)

Because of her amazing work with Hollywood costumes, she won 35 Academy Awards during her time designing.  At the time, it was almost unheard of for a woman to be that universally recognized for costume design, let alone multiple times. These recognitions made her an iconic costume designer that many up-and-coming designers aspired to be.

She was an active designer for nearly fifty years, which is an extremely long time to be in one profession.  During that fifty-year run, she significantly impacted Hollywood costume design and left a legacy for future costume designers. (Source: Medium)

Where Do Costume Designers work?

Many costume designers begin working on the stage before moving to other areas of costume design.  Stage shows can range from local productions to coveted Broadway shows.

When working in theater and on the stage, costume designers are responsible for many things:

Another area that costume designers choose to work in is film and television.  The move to television and film comes with a litany of challenges for a designer.

When working with film and television, a costume designer is responsible for:

Because of the magnitude of film and television productions, there is often a team of costume designers that the lead designer may need to oversee.

Hundreds of festivals take place around the world.  Each of those festivals requires a degree of costuming. Often, costume designers choose to go on the road and work with the festival.

Some of the responsibilities of a costume designer at a festival are:

Not all costume designers spend their careers in Hollywood.  While they may aspire to this, there are many other areas in which their expertise is required. For many costume designers, it is about following their true passion when it comes to design. Therefore, some may aspire to Hollywood, while others enjoy a more low-key atmosphere.

I Have Experience, Now What?

Perhaps you have spent countless hours volunteering and watching other costume designers, and you are ready to begin getting paid for your talents.  When you feel that you are ready to take this next step, you will need to promote yourself.

Some ways you can promote yourself successfully include:

Being a costume designer can be a magical career that you can do for many, many years.  While it can be a fantastic career, the path to achieving your goal may be a bit long and arduous.  If you spend time with mentors and perfecting your craft, you may be the next famous costume designer that everyone is clamoring to hire.