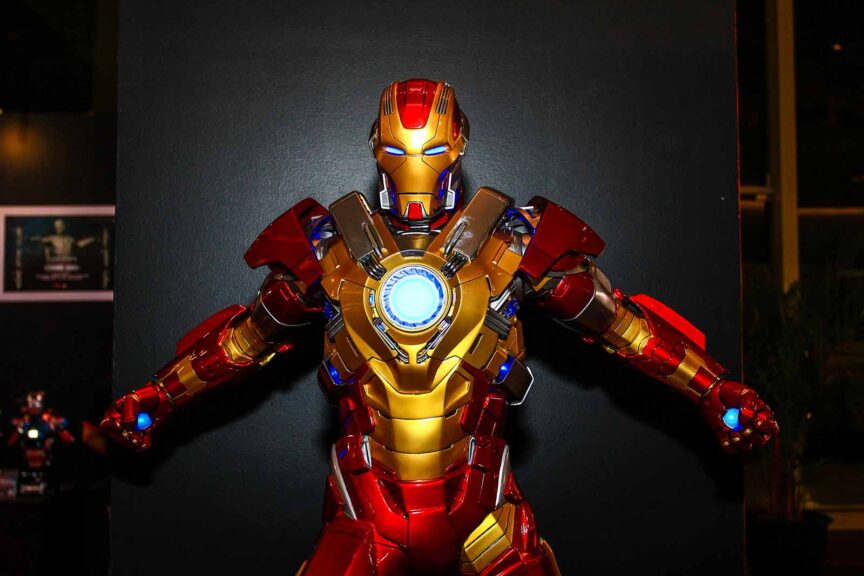 It is no secret that of all the Avengers, Iron Man’s suit has the most gadgets. Iron Man has all kinds of tricks hidden up his sleeve. Not only is Iron Man’s suit incredibly useful, but it also looks pretty cool.

While the Iron Man suit does have a plethora of insanely cool features, much of its neatest includes the science and technology that comes from the process of building the suit. On the other hand, it also has excellent features that come into play in combat, such as flight capability, hand blasters, and more.

Iron Man’s suit is full of surprises; it’s hard to know what all he has hidden in there. If you’re curious about some of the best parts of Iron Man’s suit, this article is for you. Stick around for the ten coolest features about the Iron Man suit.

How Does the Iron Man Suit Work?

In its simplest terms, the Iron Man suit is a highly technologically advanced rendition of the human body. It is not merely a suit, but more of an enhanced piece of armor that allows for maximum fighting power.

What is interesting in the way the Iron Man suit works is that much of its offensive additions can also be used for defense, and vice versa.

For example, the suit is made for numerous situations. The blasters found on the palms of the Iron Man suit can be used to shoot at opponents but at the same time act as aids in flying, both in going somewhere and slowing down.

Other additions like these allow for the Iron Man suit to function with the most elite forms of technology.

Without confusing you on the specifics of the science behind the Iron Man suit, we will say that, though fictional, it is a product of the most advanced form of manufacturing, created by Mr. Tony Stark himself.

He gathers his knowledge of machinery and combines it with his expertise in technology, creating one of the most exciting types of combat mechanisms known to man.

The 10 Coolest Features About the Iron Man Suit

Iron Man’s suit is always full of surprises. Just like any superhero, Iron Man has to be ready to save the world and fight villains, and his suit is his most important tool in doing it. If you are wondering ‘what are some good halloween costumes?‘ the Iron Man suit is definitely one of them.

Here are ten of the best features that Iron Man has built into his suit.

While nanotech is not necessarily achievable in today’s sense of science, we can apply to anything. It is the manipulation of the size of atoms, and in the case of the Iron Man suit, allows them to be able to become even smaller and fit into compact spaces.

When they are stimulated, they can shape back to their original form and connect; however, you would like them to.

How the Iron Man suit is made with nanotech is not just impressive because of its ability to contort the suit into a smaller size. This feature also allows for much of the durability of the Iron Man suit.

Since each microscopic particle functions as its piece of the suit while also staying attached to other parts, the Iron Man suit is exceptionally lightweight, mobile, and agile, features that we will further discuss later in this article.

If you have seen the Iron Man movies and the Avengers, you are probably familiar with Jarvis. Well, technically, his name is J.A.R.V.I.S. (Just A Rather Very Intelligent System).

Jarvis is the artificial intelligence voice created by Tony Stark to aid him in his ventures, both creating his projects and using them. J.A.R.V.I.S. is like voice control systems in smartphones and smart speakers. However, he is quite smarter than those systems.

J.A.R.V.I.S. is such a technologically advanced form of A.I. that, in the movies, Stark programs him to be able to communicate with Stark through the Iron Man suit.

The responsibilities of J.A.R.V.I.S. range anywhere from making the Iron Man suit perform a particular job, giving clear and in-depth descriptions of the information and condition of Iron Man’s opponents, and providing Stark with his health conditions and the condition of the suit itself.

Without J.A.R.V.I.S., the Iron Man suit would lack much of the technological capability that makes it such a unique and powerful piece of equipment. J.A.R.V.I.S. provides this information to Stark inside the suit.

Next on the list is the feature which allows Iron Man to be able to fly. Located on the bottom of the feet of the suit are rocket-powered engines, and similarly, on the palms of the hands are blasters. These four features combined allow Iron Man to fly through the air at too high speeds.

The ability to fly is in and of itself quite the advantage, but the image of Iron Man flying, both in the comics and in the movies, is a staple of his character.

Iron Man Can Protect and Project with His Suit

The chest piece on the Iron Man suit is one of the most prominent examples of a feature that provides both defensive and offensive capabilities.

As you probably know, but without us wanting to spoil anything for those who are not familiar with the story of Iron Man, Tony Stark’s chest must be protected at all costs. The material composed to cover his chest is reliable and resistant to most forms of attack.

On the other hand, the Arc Reactor energy, one of Stark’s most notable findings, has the immense power of its own. The beam-like light of the chest protector allows the Iron Man suit to put out a bright light.

The suit also can fire an even more powerful Arc Reactor energy beam, brutally damaging – if not wholly obliterating – whatever stands in Iron Man’s way.

Iron Man’s Suit is Made of Lightweight Iron

We briefly mentioned how nanotechnology allows more durability and mobility for the Iron Man suit. Here we will discuss that in more detail.

Because the suit is held together by millions of tiny pieces, it is incredibly flexible, lightweight, and practical.

While the name Iron Man is an obvious indication that the suit is made out of iron, it is the nanotech that makes the suit so powerful yet so agile. If the suit were one massive piece of iron, Stark would be no more helpful than a medieval knight in shining armor.

Because of the nanotech, each piece weighs lighter than a feather while providing maximum protection.

Iron Man’s Suit has Palm Blasters to Light and Fight

We have also discussed in short the feature of the beams on the hands of the Iron Man suit. However, we have not given our full amazement at them. These palm blasters do assist in flying, but their main job is for quick combat at medium to close range.

The hands of the Iron Man suit are one of the most mobile features of the suit, so the ability to shoot high-powered beams from them is extremely convenient. Even if Iron Man is down on the ground in a fight, up against a wall, or any other situation, he can raise his hands, shoot at his opponent, and buy himself some time.

While the mechanical and technological features of the Iron Man suit are interesting to talk about, let us not forget how cool the suit itself looks.

First off, the initial suit has such an attractive color scheme of smooth gold and royal red. These colors look great together and are yet another staple of Iron Man.

The Iron Man mask and helmet are such prominent features as well. In the movies, when Stark meanders about with the helmet on but the mask lifted, it is only a matter of time before danger calls for the mask to immediately slide shut, revealing the lit-up eyes and transforming the suit from a piece of Stark to its individual Avenger.

Another one of the features of the Iron Man suit that allows it to be such an advanced piece is the ability to put forth an immense amount of strength, much more than any typical human.

The strength of the suit allows Iron Man to punch through enemies, pick up cars, and take massive hits with minor consequences.

Although strength itself is not always sufficient in winning a fight amongst superheroes and villains, the power inside the Iron Man suit is excellent for close, hand-to-hand contact. It is also worth mentioning power other than sheer force. The blaster and missiles in the suit have their particular strength as well.

Iron Man’s Suit has its Own Homing Missiles

Speaking of missiles, the homing missiles that protrude from the top of the forearms on the Iron Man suit are quite an excellent addition. Suppose Iron Man is flying through the air while being chased by villains flying a high-tech jet. Iron Man has no chance.

Well, Iron Man might be a little more fortunate than you think. If he has got an overpowering enemy tailing him, all he has to do is kindly ask J.A.R.V.I.S. to deploy the homing missiles, which will quickly slow the enemy down.

Iron Man’s Suit is Made from Original Material

The Iron Man suit is believed to be made from a bit more complicated than simple iron. It is made of nitinol, a nickel-titanium alloy that is extremely strong yet durable.

One of the coolest features about the nitinol is that no matter how hot it gets – from blasters, missiles, flying, or whatever – it always remembers its original shape. This means that there will be little to no damage from regular use.

What Are The Names Of The Iron Man Suit

There are so many different versions of the Iron Man suit, but we will discuss the main suits used in the movies.

Finally if you enjoy Marvel, check out the 10 Best High-Quality Marvel Cosplay Costumes for more ideas!