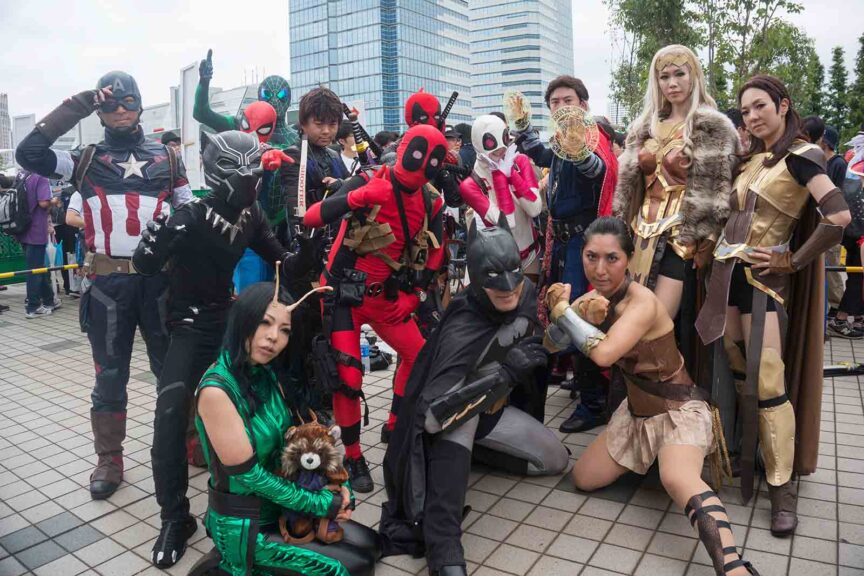 Cosplay may seem like a pretty modern hobby, but the truth is that cosplay has been around in one form or another for over a hundred years. Costume play has been in the United States for decades, but it wasn’t until it blew up in popularity in Japan that this hobby took fandoms across the world by storm.

Cosplay was first invented in the 1930s in America under the term “costuming” and originally meant dressing up in a costume. It became popular in the mid-eighties at comic conventions. It was first described as “cosplay,” then it was reinvented in the early nineties as a performance art centered around comics, television shows, games, and movies.

Cosplay may have only gained the height of its popularity over the past thirty years, but this hobby has been kicking around in America for much longer than that. Read on to learn more about cosplay and how it passed from the West to the East and back again.

When Was Cosplay Invented?

The first incident of documented cosplay occurred in America before “cosplay” was even a known term. In 1908, a couple in Cincinnati named Mr. and Mrs. Fell attended a masquerade ball and dressed as a pair of characters from a popular newspaper strip at the time.

When it first came about, this practice of dressing up as characters was known as costuming and remained popular at Halloween parties and other masquerades throughout the 1930s and beyond. At first, the people dressing up at these conventions were more generic. A cosplayer might have chosen an “alien” theme or “science fiction” theme for a sci-fi convention, but wouldn’t have chosen a specific character from the canon to emulate.

The practice of character costuming didn’t become a mainstay of comic book conventions and similar gatherings until 1975 after the advent of the film The Rocky Horror Picture Show, whose live viewings encouraged movie-goers to dress up in costume as their favorites in the show.

During this same time (the mid-1970s), the practice of dressing up as famous comic book and television show characters at conventions became even more popular, and fandoms such as Star Trek and Star Wars became rife with cosplayers from the early-to-mid-1970s. However, the term “cosplay” wasn’t invented until 1984, when it was coined by a Japanese journalist at Worldcon in Los Angeles.

While cosplay has been around in one form or another for decades, it didn’t truly receive global recognition until it was covered by the Japanese journalist Nobuyuki Takahashi for the anime news network Studio Hard. He coined the term “cosplay,” a portmanteau that combined the words “costume” and “play” to describe the performance art he saw at Worldcon involving people dressing up as their favorite characters in media. (Source: University of Montana)

Originally meant to take the place of the word “masquerade,” cosplay soon became a massive hit with Japanese youth of the mid-1980s. These Japanese cosplayers incorporated cosplay into their conventions celebrating various manga and anime shows, and soon Japan became known as the cosplay hub of the entire world. There is even a district in Japan known as the Harajuku District, which is specifically known for people walking around in cosplay in day-to-day life, even outside of conventions.

While masquerading and cosplay may have originated in America, it is the Japanese who elevated cosplay to true performance art. Since that time, cosplay has become popular across the entire world, and there are entire conventions, online forums, and web stores completely dedicated to it.

When Did Cosplay Come to the United States?

In the mid-1990s, cosplay returned in its new invigorated form to the West, where it was eaten up by Western fans who had simultaneously discovered anime and other fandoms from the East with it.

Once cosplay returned to America and Europe, it began to include not only anime and manga characters but also (Source: Strange Land Costuming):

Since its expansion back into the West, cosplay has become an increasingly intricate aspect of fandom all of its own, and in 2005, the World Cosplay Championship was introduced. Costuming and masquerading activities in the West were most popular in the mid-1980s at comic conventions and then began to dwindle in popularity.

This practice only began to expand in America again after the concept of cosplay was reintroduced by the Japanese and linked to the anime fan scene as Americans fell in love with Japanese animation. With the injection of enthusiasm for cosplay that the Japanese provided, America soon fell head-over-heels for character costumes again.

What Is the Purpose of Cosplay?

For people who have never done cosplay, it might seem odd to dress up as a character from television or the movies and go to a convention. But there are actually many different reasons why people choose to dress up in cosplay.

Here are a few of them (Source: The Artifice):

No matter what reason people have for cosplaying, it is a hobby that has historically attracted people from all walks of life and ages.

How to Make an Excellent Cosplay

So you’re interested in the history of cosplay, and you’d like to try your hand at it. Lucky for you, there are hundreds of fandoms you can choose from for your first foray into the hobby.

Here are some tips you can use to make your first cosplay the best it can be (Source: Black Nerd Problems):

And if you create your own character, there are also fun ways to help you choose a cosplay name! Historically, cosplay has been taken on by all kinds of people, so don’t be intimidated to be original. It only takes one or two conventions to become hooked on the hobby!

While some people outside of the realm of cosplay may see all the dressing-up as childish, cosplay has long been a hobby populated by adults. It’s only in recent decades that the practice of dressing up in character costumes became popular with teenagers and younger children. Cosplay has a lot more in common with masquerade balls and Star Trek conventions than it does with Saturday morning cartoons.

No matter what your reasons for being interested in cosplay, the fandoms that have a cosplay component are so numerous that you could find cosplayers in almost any of them. Whether a person only dresses up once a year for Halloween or makes it a lifestyle, cosplay has a lot to offer fans of every stripe.