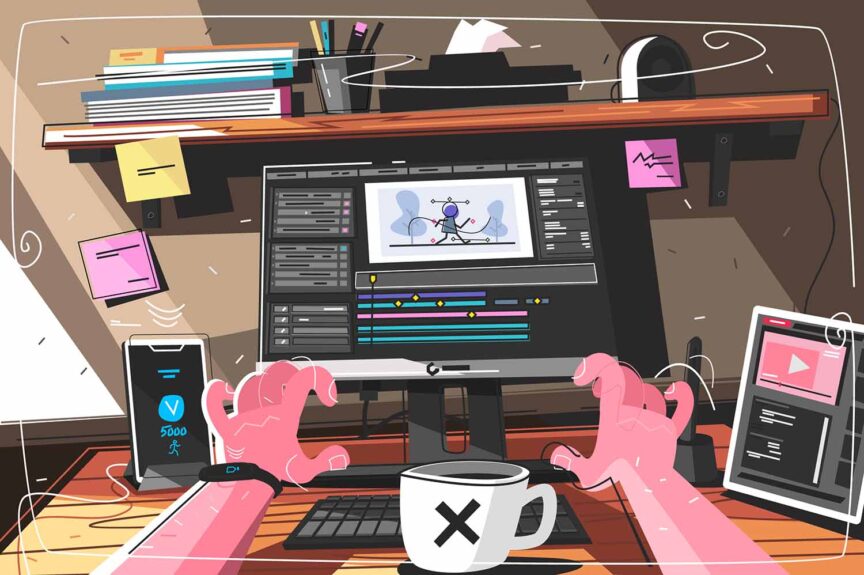 Animation is a technology that has grown tremendously, especially over the past century. It has developed from simple image movements to now being able to make a dinosaur look completely real. Animation has had a very interesting and complex history.

In the early 20th century, experimentation with animation and animation styles began. Filmmakers beginning as early as 1893 began to figure out how to create animated films from moving still images. Since then, the industry has developed into what we see today.

This is a brief history of animation and the roots that were planted for such a large part of the film industry.

What Was the First Animated Film?

The first animated film is most commonly cited as “Humorous Phases of Funny Faces,” directed by J. Stuart Blackton in 1906. This film sparked the creation of many other films that would be developed in the coming years.

“Humorous Phases of Funny Faces” was technically made using stop motion photography as well as cutout techniques, which isn’t exactly in the category of hand-drawn animation. However, it is regarded as the first animated film because it was an animated film recorded on standard picture film.

The first film that was developed using hand-drawn animation recorded on standard picture film was “Fantasmagorie” by Émile Cohl in 1908.

This film was created using chalkboard hand-drawn animation and depicts a stick figure going through a series of transitions.

Fun fact: the title of “Fantasmagorie” is referring to the word “Fantasmograph,” which was a 19th-century “magic” lantern that would project somewhat ghostly images onto surrounding walls. This short film’s name refers back to some of the first ideas of animation as a concept.

Both of these films were very short and quite simple, but they were still groundbreaking in the film industry. These films sparked a whole new kind of entertainment and technology, which led to more and more animations being made every year.

How Long has Animation Existed?

Animation itself, if you are looking at it in terms of even just the simplest movement of still picture drawings, has actually been around for about a thousand years. However, animation using film has only been around since slightly before the 20th century.

In the 1890s, a lot of experimentation began with animation and film. Many photographers were the first to try and create an animated moving picture.

How Long has Animation Existed?

Amongst those photographers was Eadweard J. Muybridge, who created something very similar to an animated film in 1893. He worked in motion picture projection and stop motion photographs, which again, while it isn’t technically animation, it was a very good start.

Many other pioneers contributed to the development of the animation industry, such as:

In short, animation using still drawings has been around for thousands of years, while the process that set the roots for modern-day animation to grow upon began in about 1890.

When was the First Computer Animation Made?

In the 1940s and 50s, experimentation with computer graphics and computer animation began to rise in the film community. However, it took quite a while for the first entirely computer-animated feature-length film to be released.

That film? Believe it or not, it was actually “Toy Story,” which was released on November 22nd, 1995. There were a lot of animated films released prior to Toy Story, but most used cel animation, which we will explain soon.

“Toy Story” being released changed the entire history of movies. The movie was created with both Disney and Pixar working together. At this point, Pixar, chaired by Steve Jobs, was very young, and the stakes were high for such a new company.

Not only was this the first entirely computer-animated film, but “Toy Story” was also released in 3D. This was incredibly new to everyone as people of all ages went to the theatre to see the revolutionary film.

When “Toy Story” was released, it ended up being the highest selling film for three weeks in a row and became a significant piece of film history.

This film ended up being so successful that there were actually four sequels made to the original “Toy Story,” as well as a spinoff movie titled “Lamp Life,” created in 2020.

Thanks to computers and the creation of “Toy Story,” the animation world grew and developed into the amazing animation technology we have today.

Who is the Father of Animation?

After this, he went on to work more in the film industry and made significant accomplishments along the way. Blackton was particularly innovative in his camera work, as well as the techniques he developed for editing films.

In 1921, Blackton headed back to England, where he directed three costume dramas. These were important for the film industry because they were in “Prizmacolor.” The films were called:

Part of Blacktons way of presenting his films were never particularly sophisticated when it came to technique, but he was more so of a showman. People weren’t attracted to his films because they were extremely amazing, but for the glamorous cast and the vibrant and lavish showings.

In 1923 Blackton returned and worked for Vitagraph, a film production company in the United States. When Warner Bros took over Vitagraph in 1926, Blackton retired.

Unfortunately, Blackton lost all of his money in the 1929 stock market crash and had to go back to work. He continued to work at the Anglo-American Film Company, but sadly, he died in 1941 in a car accident.

What About Walt Disney?

Walt Disney is someone who is commonly thought of as being the father of animation. While he technically is not, he still was a pioneer in the film industry, and he is the one who has had the most impact as far as films go.

Disney ended up being the biggest creator of animated shows and movies, and he created a legacy that continues to this day.

Almost everyone remembers growing up with Disney movies. No matter how old you are, Disney has been around. It’s honestly an incredible thing that Mr. Disney was able to impact so many people.

What was the First Disney Animation?

A young animator at Disney created the Oswald films. Before creating the Oswald films, he was actually working on a project called the “Alice Films” however, after growing tired of the series, Oswald was born.

In 1927, a deal was created with Universal and Disney that would develop a series based on Oswald the Lucky Rabbit and his adventures. There was nothing super particular about the name Oswald or the fact he was a rabbit, the name was apparently chosen from a hat, and they picked a rabbit because the market was full of cat cartoons.

The first Oswald film was released on September 5th, 1927. This film was titled “Trolley Troubles” and was a success amongst the public.

What’s really interesting about the Oswald series is that Mickey Mouse was actually a result of Disney’s loss of the Oswald character due to copyright issues. Mickey Mouse debuted in 1928, just after Disney lost the rights to Oswald.

Even after Disney was no longer involved, Oswald still appeared in films for more than a decade. Eventually, it was actually Mickey Mouse that ended up overshadowing the Oswald films.

Mickey Mouse became Disney’s most iconic character that they have ever created. Mickey is still a character today on Disney shows for kids.

Something really interesting about the Oswald film is that one of the films was actually lost for about 90 years. This short titled, “Neck ‘N’ Neck,” was in Japanese animation historian Yasushi Watanabe’s possession for more than 70 years.

Although it wasn’t the full-length film but a smaller section that was intended for production, it is still a piece of animation history that is significant to Disney and everything they have created.

The first feature-length animation produced by Disney was “Snow White and the Seven Dwarfs,” which was produced in 1937. This film became iconic, and Snow White was introduced as the first of the many different Disney princesses that would end being the inspirations for so many children.

Cel animation is the most traditional form of animation, consisting of hand-drawn characters and painting objects on celluloid, a transparent sheet.

Cel animation is the most traditional form of animation. It is what Disney used for all of their films until 1995 when Toy Story was released, and computer animation became more popular.

Prior to 1990, cel animation was used for nearly all animated shows and films that were created.

Oswald set the stage for iconic characters to be created, such as Mickey and Minnie Mouse. Without Oswald, the history of animation would be completely different.

Animation has a really incredible history that has been shaped by significant:

Pioneers in the animation industry all contributed to the modern animation that we know today. These are the people we’ve discussed in this article:

Animation has come light-years since the creation of “Humorous Phases of Funny Faces.” We have gone from series’ of stick figure drawings to feature-length animated films that actually look real.

Shifting to computer animation was the move that would really take animation to the next level. After the release of “Toy Story” in 1995, computer animation has grown to the point where we can create literally anything we can think of and make it look realistic.