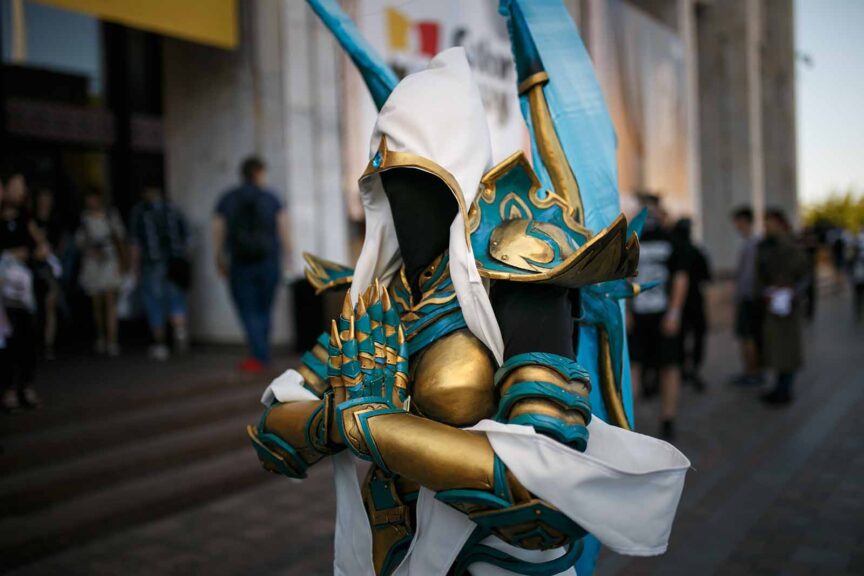 Creating a character’s aesthetic for a story is a complex process. The costume design should feel natural, and there are numerous aspects to consider when bringing a character alive. Though the design process may slightly differ according to the project needs, all costume designers should be familiar with the core steps for developing the perfect look.

Costume design is a collaborative process. The process begins with a designer attending a production meeting, then presenting sketches and renderings to a design team. After, the approved renderings are sent to the shop, and the designer attends fittings as needed. Finally, the costume is revealed in dress rehearsals and costume parades.

Understand that this is not a straight-line progression. In many cases, the costume designer must revisit an early step to ensure that they remain in line with the director’s vision or to make suggestions as needed. In any case, you must consider each element of the design process within the story’s context and character to achieve a beautifully cohesive piece in the end.

How Do You Design a Costume?

The process of designing a costume will depend heavily on the type of story, concept, media or other event you’re working with. For example, the costume design process will unfold quite differently if you want to become a movie costume designer, a video game character designer, or dress a character for a Broadway show. There is a great difference between designing performance costumes versus designing costumes for a video game character. And the genre of the story will play a crucial role in your design choices.

You will need to consider whether your character is a part of a fantasy world and infuse their world’s reality into their clothing. On the other hand, an individual in a non-fiction period film will require significantly different elements in their outfit. These components reflect the culture and societal norms of the time.

These facets of your character’s life and history will directly inform the specifics of your costume design process. However, there are baseline steps that all designers must take when developing a new look, regardless of the media, story, genre, or character archetype they’re creating for. These steps are discussed below.

What is the First Step in the Costume Design Process?

One of the first things you might want to do is learn costume design. And after having some knowledge you will first need to establish your goals and direction for your character’s attire. This is known as the “pre-design” stage. During this step, you will need to familiarize yourself with the story and world to determine how you want to communicate visually with the audience, writers, and directors. (Source: SCC Digital Video Productions)

According to design experts at SUNY Geneseo, a costume designer’s goals  should align with the set designer’s (this applies to any form of media and entertainment).

These should be separated into five distinct categories (Source: Geneseo):

As you work through the pre-design process, remember to avoid overthinking the look too much. Your character should be dressed as naturally as you would dress for the day. Imagine how you choose outfits every day and apply the same natural feel to ensure the final piece does not appear forced or artificial. Once you complete the pre-design stage, you’re ready to begin the costume design process.

The Full 7 Steps in the Costume Design Process

Through each phase of your costume design process, it is best to maintain open, consistent communication with the director and other designers. This way, you will all remain on the same page throughout the creative process and produce a cohesive, accurate representation of your story, its world, and its people. With this in mind, you are ready to begin.

This is an extension of the pre-design phase described above. Before you begin creating a look character’s look, you will need to get to know them. As the costume designer, you should receive a copy of the script, screenplay, or similar document. Study this carefully, as this will provide you with invaluable insight into who your subject is.

One of the most important things to remember about your character is that they are not, and will never be, one-dimensional. As the story progresses, their actions and perspective will change. Their costumes should reflect this growth and development. (Source: Geneseo)

Meet with the Director

You may need to perform this step multiple times throughout the entire creative process. There is no guarantee that yours and the other creators’ ideas will meld on the first try.

It is highly likely that the director and writing team will need to rework the concept and story to accommodate your plans better. Communicate openly and ask questions during this step to ensure the designs meet the performers’ needs and project leads.

Now is where the costume begins to come to life! With a definite direction and a functional understanding of the character you will be dressing, you can move forward with conceiving individual parts of the outfit and the look as a whole.

This step requires more than a pencil sketch. It can also entail:

Once you have completed your preliminary paintings and sketches, present them to the director and writers. This will ensure that everyone agrees with your aesthetic vision, so you do not move forward with a potentially inviable idea. (You can use your sketches to suggest conceptual changes as well. This may come in handy after the initial production meeting.)

Once everyone is on board with your direction, it’s time to commit to your costume design. As you develop the rendering, it is best to depict several iterations of the costume, all worn by your character. At times, rendering may include a single character wearing several different costumes or a group of people, such as a choir, dressed in matching outfits.

In the previous step, the incorporation of color and fabric swatches were optional. However, these are essential parts of the costume rendering process, as hues and textures serve to bring the look to life and show how it will truly look in the story’s context.

Direct the Construction of the Costumes

Once the renderings have been approved and agreed upon, you are ready to begin realizing your vision. Present your designs to a qualified costume shop, and make sure to deliver written or verbal instructions along with the illustrations. Your guidance will ensure that every part of the clothing is made precisely to your specifications.

Remember that you may need to draw up more sketches if the shop needs more detailed directions on the costume construction. For example, if your costumes are layered, it would be best to illustrate the bottom layers separately from the top.

Further, any intricate designs you wish to see on the clothes should be drawn independently as well. This will ensure that there are no inaccurate visual interpretations of your intended look.

After the garments are made, the actors will need to try them on. Fittings ensure that the clothes are tailored to the actors’ bodies and can accommodate specific actions and movements. You should be present at these fittings, especially if you have explicit preferences for how you would like the clothing to move and behave along with the actor.

Observe the Finished Costumes on Set

You will need to observe the costumes in real-time, under the exact set conditions that the final play, film, show, or other production will require. During this step, you will have the chance to see your clothes under the lighting and against the set, enabling you to determine what facets of the costume need to improve.

It is best to observe the costumes in each of the following events:

If the need arises, you can go back to any of the preceding steps and make the necessary changes to achieve a style that fits your characters and story appropriately.

What Are the Elements of Costume Design?

Costume design is deeply rooted in Greek history, beginning as far back as the 5th century. The practice started with a Greek playwright known as Aeschylus, who crafted attire to adorn actors performing in his plays. As time progressed, costume design became more commonplace and grew in popularity during the Middle Ages and the Renaissance.

The more the public began to appreciate stage performance, the more apparent it became that these specially made garments evoked emotions and reactions from the audience that enhanced their experience of the story. During the 16th century, costumes were used to demonstrate the roles of play characters, the most common being servants, harlequins, and doctors.

Designers developed an eye for greater specificity in their costumes throughout the 18th and 19th centuries, leading the practice to become much more specialized and emphasize historical accuracy and story concepts. Now, costume design has become an integral part of the art of storytelling, and few can imagine entertainment without it. The best thing is that you can take online costume design courses and become a designer from the comfort of your home!

When Did Costume Designing Begin?

Designing a character’s clothing is much more than throwing a few colors and garments together and hoping it looks good. This is a highly technical process that demands careful consideration of several design elements, such as (Source: Massachusetts Institute of Technology):

Take your time to consider how you want each of these elements to interact with one another. Rushing a project along may result in you inadvertently overlooking one of these factors and creating a piece that does not portray the character as you may have hoped.

These seven essential steps help guide the elements of costume design, from space and lines to colors and textures. Costume designers are tasked with designing a character’s look bear a great responsibility, one that influences the audience’s psychological experience of the story and brings the character to life in the correct period and style.