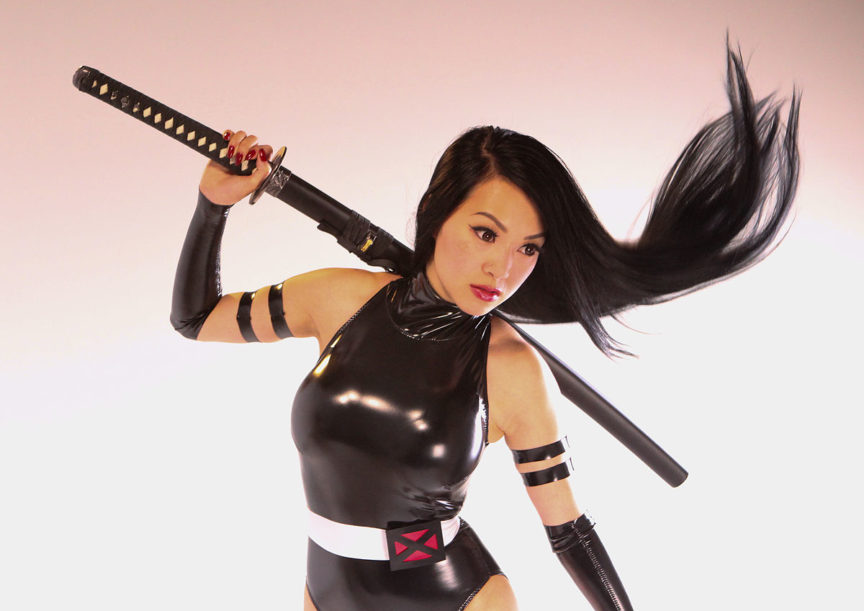 In 2010, Amped Asia called her, “probably the most universally attractive Asian girl on the planet due to her geekiness and sexiness too.” Believe it or not, there’s a lot more to Linda Le than that. Known as Vampybitme to her Cosplay fans, Le is an American cosplayer, columnist, model, writer, producer, and Internet personality.  She’s a vampy girl in a geeky world and, in this article, we’re sinking our teeth into her personal stats, and her professional accomplishments.

So, what do you want to know about this Cosplay pinup girl beside her cell phone number? It turns out that we’ve been getting a lot of inquiries about Linda and how she did it, does it and plans to keep doing it. First, let’s talk about some personal stats. In the beginning section of the article we’ll discuss the following:

Then we’ll delve into Linda’s professional achievements. Read on to see how Linda Le brought game to the Cosplay gaming world

ALL ABOUT LINDA “VAMPYBITME” LE

What’s the scoop on this femme fatale? Word has it, she’s rockin’ out on Cosplay. Check out these stats and see if we’re lying.

If you want to get more involved and interact you can follow her twitch.  Check out videos, sign up for chat and watch live action play.  Check out her Twitch Channel for more info.

In addition, to that there is her online store with so many cool items.  You can get everything from poster prints to clothes.  Everything is centered around Linda Le of course. She’s crushing it!

HOW MUCH IS LINDA LE WORTH?

She may be the star of the Cosplay gaming space, but she’s certainly worth a lot in the material world. Linda’s net worth, which comes primarily from modeling, is at approximately 24 million as of 2019 (source). That’s a pretty big paycheck for a pretty petite Cosplayer.

WHY IS LINDA LE FAMOUS?

So how did this vixen claim her Cosplay fame? Surprisingly, not by looks alone. Linda actually came to earn her Cosplay celebrity status when a Japanese toy and collectible company called Kotobuiya noticed her cosplays in the showcase book “Otacool 2. (source).

HOW OLD IS LINDA LE?

A very sexy Sagittarius, Linda Le was born on December 15, 1982, making her 37 by the time 2020 rolls around. No stranger to the Internet, Linda joined Nerdist Industries in 2012 to produce Just Cos, an Internet show about the world of Cosplay, hosted by fellow cosplayer Chloe Dykstra. (source). However, as cunning as she is stunning, Le is clever enough to make sure to invest her time in multiple platforms to create several streams of revenue.

HOW TALL IS LINDA LEE?

Though a major threat in the Cosplay gaming world, the star stands at a petite 5’2” and weighs in at a mere 90 lbs.

WHERE IS LINDA FROM?

Exotic though she may look, Linda Le is as American as apple pie. A native Okie, born in Okmulgee, Oklahoma, Le gets her enviable Asian features from her Vietnamese immigrant family. When she grew up, she moved to San Jose, California where she graduated with a business degree from San Jose University. (source).

Beauty school dropout? Not quite. After nabbing her business degree from her alma mater, Linda moved on to study hairstyling at Paul Mitchell’s in the US, and at Toni and Guy in London as well as in Tokyo. She came back to the good old USA to teach modeling and makeup.

Turns out Vampybitme doesn’t get much beauty sleep. In 2013 interviews, Le said that she “works about 15 hours a day and gets a maximum sleep time of 4 hours.” For Le, fifteen hours a day adds up to a lot of productivity. Here are just some of the accomplishments of the Cosplay:

Want to take a page out of Vampy’s book? If you’ve got the talent, charisma and smoldering sex appeal, you too could be on your way to booking shows at upwards of $10,000 a pop. With room, board, and travel included, that’s a pretty sweet deal.

She also has a stout following on Instagram.  Check out more photos below as well as check out Vampybitme on Instagram at instgram.com/vampybitme.

Fortunately, we have a lot more information about to get started!  Check out our article on how much do cosplay costumes cost and see how cosplay costumes are broken down into basically three cost categories.. Hope you enjoyed our low down on Linda.

Source: This is Cool